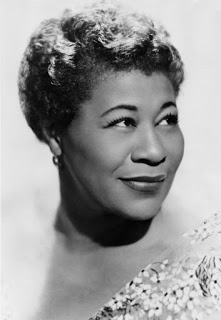 Last week I had the time of my life singing a centennial tribute performance honoring the great Ella Fitzgerald. What a special moment in the career of this singer to formally and publicly pay tribute to the one performing artist who had provided the greatest inspiration… who served as the primary model after which my own voice developed. To say that I grew up listening and singing Ella’s songs would be a gross understatement. Most jazz vocalists have several influences. I had Ella. While yes, I was also enjoying the beautiful radio voices of Olivia and later, Whitney, my truly formative years were spent learning every nuance, pitch, smear and syllable sung by the First Lady of Song herself.

In preparing my show last week, I dusted off several transcriptions of Ella’s arrangements that I had written very early in my career. Those were, after all, the first songs I wished to learn how to transcribe when I was a jazz arranging student. I have been singing them in public for so many years and they never get old, because, well, let’s face it–the music of Nelson Riddle and George Shearing is timeless. So those transcriptions will be used again and again, long after I’m gone, I am sure.

I also ventured to create a few new arrangements, plus one that was essentially a note-for-note transcription of Ella’s original recording of “A Tisket-A-Tasket” with the Chick Webb Orchestra. This was her first big hit with the band, and it made her an instant international star. I was a bit surprised that the entire audience (as well as the band) did not know the parts in which audience participation was traditionally included (“So do we, so do we…” and “Was it green? Was it red? Was it blue?”) It is hard to remember sometimes that my obsession with Ella dating back to the 1970s was not shared by American youth’s cultural consciousness… I did not hear this song on the radio–I heard it because I FOUND it and listened to it tirelessly for years and years… So again, I was surprised that my fascination with Ella actually set me apart from the band and the audience last week to a certain degree. Of course I knew the songs very well because I had prepared to perform them…for several decades, in fact… but why didn’t they?

There is one aspect of this song that I find somewhat confusing. The poem reads “I sent a letter to my Mommy and on the way I dropped it.” Later the text says “a little girlie picked it up and put it in her pocket…” Still later, Ella complains that she wonders about the whereabouts of her “little yellow basket” and hopes the girl will bring it back. The letter or the basket? Didn’t she drop a letter on the way to the post office? What’s this about dropping a basket? And how can a little girl put a basket in her pocket? This ambiguity really sets me off. How can I properly prepare a performance when I can’t even ascertain what the song is about? A lost letter or a lost basket? What happened to the letter? Did it ever get delivered? Isn’t that more important than stewing about an over-the-arm, wicker, letter- carrying basket? Sometimes I just don’t know…

Well, I have accepted that I may never learn the secret to the letter/basket question. The answer, like a host of other ambiguous song lyrics, is probably blowing in the wind.